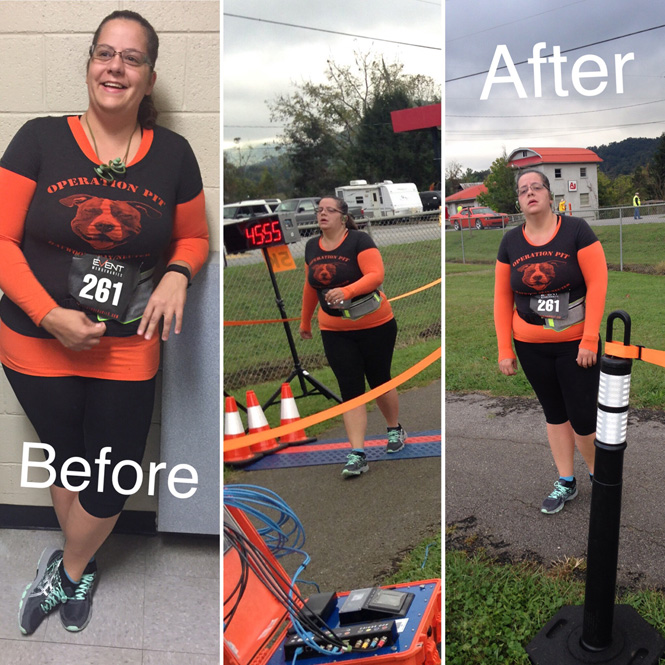 Why did you sign up to do this race?
I actually was given the race because a friend of mine wasn’t able to make it. She had seen that I had been getting into more and more runs during the year and offered to transfer over her race entry to my name. I had never done a race before but she talked me into it. So I signed up just to be able to take that step into doing races.
How did you feel once you crossed the finish line?
I was actually really proud of myself for crossing the finish line. I had a lot of things going against me during the race. I hadn’t trained properly. I had a hurt knee. I fell and twisted my ankle. But I just kept telling myself not to quit. I had to finish. And when I did I could have cried. It was a very proud moment in my life. I hadn’t given up. I had finished.
What would you say was the hardest challenge in this race?
The unknown. I had never done a race before so I didn’t know what to expect. I didn’t know if I could do it. I didn’t know how I would feel in a collection of other runners. I didn’t know how the cold air would affect my lungs. I had so many unknowns. But I look at them now as learning lessons. I would never have those answers to those challenges if I hadn’t took the step to do the race.
What was the most rewarding thing about completing this run?
The completing part. I finally got to say to people: Yes, I’ve done a 5k before. I’ve done online races before which go by the honor system and allow you to do them at your pace when you can. But this was my first in person race. And the feeling of the two races is different. People tend to judge you differently too. I’m not putting online races down. I love my online races I do and they are for great causes. But many people I know didn’t look at me as a runner until I did a live 5k race.
Was there anything or anyone in particular that helped you throughout your training?
I didn’t really train. My friend who gave me the entry was very supportive in telling me I could do it and that it would be fun. But I didn’t really train for it. I also didn’t know how to train for it.
Any final words of encouragement and thoughts you’d like to share?
Do it. Just do it. If you’ve even for a second thought about it do it. It is an experience you will never forget. It is also something nobody can fully describe to you. I did come in last on my race. But I did it in 45 minutes which according to other running groups I’m a part of on Facebook would not be last in their town. Also I was first in my age division. And most importantly I finished. I completed it. I get to say I ran a 5k. Even now it makes me smile knowing I did it.